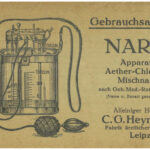 The German surgeon Heinrich F. W. Braun, M.D. (1862-1934) described his elegant ether-and-chloroform inhaler in 1901. Called the Narko Apparatus, the inhaler was manufactured by C. G. Heynemann, in Leipzig, Germany. Since the 1860s, anesthesiologists had sought to increase the safety of chloroform by combining it with less potent drugs, such as alcohol and ether. This practice was later abandoned. The apparatus used the "blow-over" principle, pushing air over the liquid anesthetics through a hand-pumped rubber bellows. It was equipped with both a mask and a long metal tube that could be inserted into the pharynx (the opening at the back of the throat), for insufflation anesthesia. The instruction booklet shown here was included in the case with the apparatus in the WLM artifact collection. The illustration shows how the hand bellows, and either the mask or the  pharyngeal tube would be attached to the apparatus by lengths of rubber tubing.