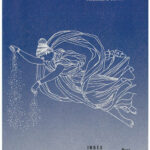 Barbiturates are hypnotic and sedative drugs, first introduced at the turn of the 20th Century. The pharmaceutical company Sharp & Dohme developed the short-acting barbiturate, vinbarbital, in 1939. Marketed under the brand name Delvinal Sodium, it was used to produce sedation, analgesia (pain relief) and amnesia, particularly in obstetrics. Delvinal was also used in the treatment of epilepsy and psychiatric disorders. In surgery, it was hailed as a superior preanesthetic agent, with fewer and milder side effects than those of older barbiturates. At that time, barbiturates were widely used to reduce the muscle tension due to anxiety prior to the administration of anesthesia. Inhalational anesthetics alone could not always provide adequate muscle relaxation for surgery without the risk of anesthetic overdose. The increasing use of neuromuscular blocking agents, also called muscle relaxants, significantly changed this practice. The brochure shown here is in the WLM's collection of the papers of John Adriani, M.D.