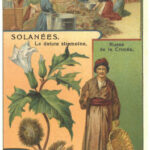 The German chemist, Baron Justus von Liebig (1803-1873) was one of three chemists who independently discovered chloroform. In 1865, he founded Liebig's Extract of Meat Company. For over a century, the company produced colorful advertising ephemera, including a series of trade cards that featured medicinal plants from around the world. The example shown here features Datura stramonium; its common names include angel's trumpet, jimsonweed and thornapple. D. stramonium is an extremely invasive plant that grows in all temperate regions of the globe. Every part of the plant is poisonous. Ingesting, or in some cases even touching it, can cause neurological and heart damage, and can prove fatal.   D. stramonium is one of several plants from which the central nervous system stimulant, atropine, and the sedatives, hyoscine and scopolamine, can be obtained. These are among the agents that have been used by anesthesiologists. In traditional medicine it has been used to treat asthma, headaches and inflammatory conditions such as sprains and rheumatism. In recent studies, it has been shown to have analgesic, antimicrobial, antioxidant, hallucinogenic and insecticidal properties. It was an ingredient in the drug compounded by the Japanese surgeon Seishu Hanaoka (1760-1835.) In 1804 he used his mixture, called Mafutsusan, to administer modern surgical anesthesia, 42 years before the first demonstration of ether anesthesia.