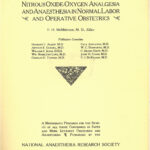 The American Society of Anesthesiologists (ASA), founded in 1905, is now the largest professional society of its kind in the world. But it had some growing pains when challengers arose. The National Anesthesia Research Society (NARS) was founded in 1919. The following year NARS published its only monograph, Nitrous oxide-Oxygen Analgesia in Normal Labor and Operative Obstetrics. The contributors to this volume were the first-generation leaders in the subspecialty of obstetrical anesthesia. They included Carl Henry Davis, M.D., author of the first textbooks on this subject published in the U.S., John H. Evans, M.D., Arthur E. Guedel, M.D., and Elmer I. McKesson, M.D., then the world's foremost authority on nitrous oxide anesthesia and analgesia. In 1925 NARS changed its name to the International Anesthesia Research Society.