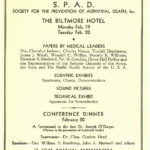 Paluel Joseph Flagg, MD (1886-1970) helped lead the first generation of professional anesthesiologists in the U. S. He published the second American textbook in this field, The Art of Anesthesia, in 1916. Throughout his career, his deepest interest was in ensuring that the patient had enough oxygen. His inventions included an oral airway, a set of endotracheal tubes, a laryngoscope, a resuscitator and a blood oxygen scale. In 1933, Flagg called together public health officials and colleagues who shared his passion. Among them were Chevalier Jackson, MD, who is considered the father of bronchoscopy and laryngology, and the eminent physiologist Yandell Henderson, MD. Advisors included the U. S. Surgeon General, as well as representatives from the U.S. Army and Navy. This group founded the Society for the Prevention of Asphyxial Death. Like the Royal Humane Society, S.P.A.S. sought to save lives through research and the dissemination of information to physicians and the public. The flier shown here announces the Society's first Annual Meeting in February, 1934.  It is part of the WLM's collection of the S.P.A.D. Archives. Ten years later, Flagg published The Art of Resuscitation, a textbook that synthesized  what he and his colleagues had learned.  By that time, the American Society of Anesthesiologists had taken over many of the functions of the S.P.A.D., and was on its way to becoming the world's leader in patient safety initiatives.