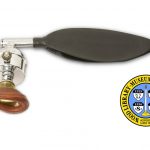 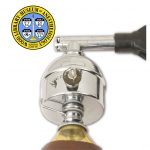 Dr. Joseph Clover (1825-1882), an English physician, first described his Portable Regulating Ether Inhaler on Jan. 20, 1877. Clover was an especially sought after anesthesiologist and early pioneer in the specialty. This was the best-known of many inhalers that Clover designed. The dome-shaped reservoir was turned to points on a control dial to gradually increase or decrease the percentage of the air that passed over the ether. Several inventors based new inhalers on this, while the original continued to be manufactured as late as the beginning of WWII.

Note Type: General
Notes: The earlier date in the date-range for the possible date of manufacturer is
based on the year Reynolds & Branson converted from a partnership to a
private company (Gough, 1934).

Note Type: With
Notes: With a wooden case and anesthesia accessories.

Note Type: Physical Description
Notes: Each half of the body of the inhaler is a different shape; The half that
connects to the reservoir bag is half of a sphere in shape, and the half that
connects to the oronasal-mask is cylindrical with a diameter equal to the
half-sphere, approx. 9 cm (This is because the ether-vessel is spherical in
shape with one-half of it surrounded by a chamber for warm water); An
indicator is stationary with the mask, and points to a scale marked along the
cylindrical-portion of the inhaler; Rotating the inhaler changes the position
on the scale that the indicator points to; The scale includes the numbers 0,
1, 2, and 3 and the capital letter F; 0 indicates that the patient is
receiving air that has not passed through the ether chamber; F indicates that
all of the air reaching the patient has come through the ether chamber; As
the inhaler is rotated from 0 to F the air that reaches the patient contains
a greater concentration of ether; On one side of the cylindrical-portion of
the inhaler is an opening, with a vulcanite stopper, through which the ether
chamber can be filled; The stopper is held onto the inhaler by a short chain;
A screw on the other side of the cylindrical-portion of the inhaler can be
removed to fill the water compartment; On the half-sphere portion of the
inhaler is a metal label with manufacturer’s markings: “REYNOLDS & BRANSON
LTD [new line] LEEDS”; Numbers are stamped into the metal near the connection
for the reservoir, “6814”; The mask is celluloid with a substantial leather
face cushion around the rim.

Note Type: Reproduction
Notes: Photographed by Mr. William Lyle, July 28, 2010; In order to present an image
of the apparatus in the best state possible, this example was photographed
with the following alterations: The reservoir bag in photo is a Ohio Medical
Products rebreathing bag from the Parts Collection.

Note Type: Historical
Notes: Dr. Joseph Clover (1825-1882), an English physician, first described his
Portable Regulating Ether Inhaler on Jan. 20, 1877. Clover was an especially
sought after anesthesiologist and early pioneer in the specialty (Marston,
1949 ; Lee, 1960). This was the first inhaler that allowed physicians to
control the amount of ether administered to patients, and the best-known of
several inhalers that Clover designed. Several new inhalers were based on
this, while the original continued to be manufactured as late as the
beginning of WWII (Atkinson & Boulton, 1977). Minor features of the inhaler,
such as the opening to fill and empty the ether chamber, varied by
manufacturer as it was not uncommon for them to manufacture-in their own
design changes. More significant modifications in the design were made by
anesthesiologists. In 1898 and 1899 Professor T. Wilson-Smith incorporated a
number of modifications including effectively reintroducing the “wide-bore”
principle, originally suggested by Dr. John Snow, by having the diameter of
the inhalation tubes enlarged to match the diameter of the human trachea
(Galley & King, 1948). Two years later Sir Frederic W. Hewitt made a number
of modifications independent of Dr. Wilson-Smith. Like Wilson-Smith, one of
those modifications was to increase the diameter of the inhalation tubes
(Galley & King, 1948). Hewitt’s work was much better known and recognized so
that by the time the significance of the “Wide Bore Principle” was recognized
Hewitt was given the credit for igniting its application in anesthesia
(Galley & King, 1948).