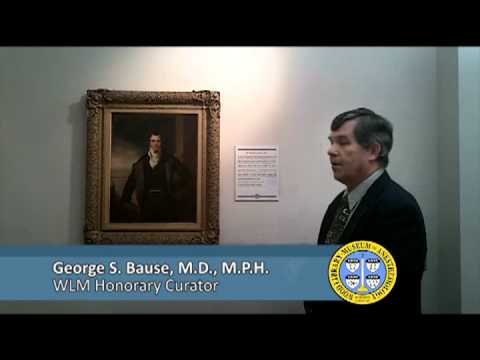 In 1800 the British chemist, Sir Humphry Davy (1778-1829) published his meticulous research on nitrous oxide (N2O), also known as laughing gas. Davy's experiments had included inhaling the gas and observing his own reactions. He noted that it eased the pain of his toothache, and suggested that it might be used to relieve surgical pain. Although his book was widely praised, the idea of inhalation anesthesia was not immediately embraced. Another 44 years passed before the American dentist Horace Wells tested nitrous oxide's capacity to diminish pain by having one of his own teeth extracted while under the effects of the gas. Davy himself did not continue this line of research. He is better known today for adding two elements to the periodic table, chlorine and iodine, and for inventing a safety lamp for miners. In 1820, he became President of England's premier scientific organization, The Royal Society. In 1869 the Davy Medal was established under the will of his brother, Dr. John Davy, F.R.S. Since 1877, the Davy Medal and a monetary prize have been given annually by The Royal Society "for an outstandingly important discovery in any branch of chemistry." In 1926, this example of the medal was awarded to Sir James Walker (1863-1935) for his work on the theory of ionization.

Note Type: General
Notes: Title taken from the Royal Society’s name for the medal, as printed in Royal
Society Proceedings. Date based on the date on the medal. Because it is a
copy or duplicate of the original bronze medal it may have been made later
than 1926.

Note Type: Physical Description
Notes: Round, silver[?] medal measuring 7.6 cm in diameter; One side of the medal
is a profile bust of Sir Humphry Davy in relief; Davy is facing the viewer’s
right; His hair is short and wavy and he wears a coat with a collar, a
neckband or wrap, and a frilled shirt; Markings on the bottom of the bust
include, “A. B. JOY Sc. N. MACPHAIL F.”; The other side of the medal is
marked with the following text, “THE ROYAL SOCIETY [new line] TO [new line]
SIR JAMES WALKER, F.R.S.[new line] IN ACCORDANCE WITH THE WILL OF [new line]
HUMPHRY DAVY [new line] WHO DEVOTED THE TESTIMONIAL PRESENTED TO HIM BY THE
[new line] COALOWNERS OF THE TYNE AND WEAR [new line] TO THE ENCOURAGEMENT OF
CHEMICAL RESEARCH [new line] 1926.”.

Note Type: Historical
Notes: The Davy Medal was established in 1869 under the will of Sir Humphry Davy’s
bother, Dr. John Davy. The Davy Medal is awarded yearly to recognize chemists
who have made especially significant discoveries. While Sir Humphry Davy may
be best known for his pioneering work in electrochemistry and for the
development of a safety lamp for miners, which minimized the risk of
explosions from methane gas, anesthesiologists know him for his work with
nitrous oxide (Riegels et al., 2011). In his 1800 text, “Researches, Chemical
and Philosophical; Chiefly Concerning Nitrous Oxide, or Dephlogisticated
Nitrous Air, and its Respiration,” he wrote, “As nitrous oxide in its
extensive operation appears capable of destroying physical pain, it may
probably be used with advantage during surgical operations in which no great
effusion of blood takes place.” Sir Davy did not pursue his proposal that
nitrous oxide might be effectively used to relieve surgical pain, and 45
years passed before the dentist Horace Wells tested nitrous oxide’s capacity
to diminish pain by having one of his own teeth extracted while under the
effects of nitrous oxide.

Note Type: Historical
Notes: The silver medal described here is a duplicate of the original bronze medal
awarded to Sir James Walker in 1926 for his theoretical work on ionization
(SydneyPlus catalog record for the bronze medal is akdp). A Scottsman, Sir
James was knighted in 1921 for his contributions during WWI.

Note Type: Reproduction
Notes: Displayed in the first floor, Northwest Highway, Wood Library-Museum gallery,
and in a Humphry Davy display case in the John Adriani room on the third
floor of the ASA headquarters building on Northwest Highway in Park Ridge, IL
from 2010-2014.