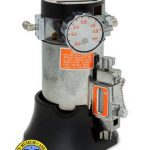 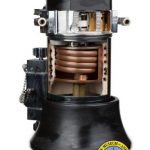 The man-made liquid anesthetic enflurane (Ethrane) was synthesized in 1963 by chemist Ross C. Terrell, then working for Ohio Medical Products. It was the first of the new inhalation agents to challenge the dominance of halothane (Fluothane), which had been introduced more than a decade earlier. Enflurane met the three requirements that govern the usefulness of modern anesthetics described by Dr. Terrell in 2008: volatility, nonflammability, and stability. The latter quality ensured that the agent did not react with either water or soda lime in the breathing circuit, nor did it corrode metals. In 1972 it was approved for clinical use in the U. S., where it rapidly became a popular alternative to halothane. Like halothane, enflurane was also used worldwide, but to a lesser extent. Its use declined in the late 1990s as newer agents gained acceptance. The Enfluromatic Vaporizer was probably introduced by The Foregger Company in the late 1970s. It was calibrated to vaporize only enflurane. This example was dissected for teaching purposes by Mr. Eddie Bowie, who later gave it to the Wood Library-Museum.

Note Type: General
Notes: The early year in the date range for the possible year of manufacture is
based on the filing record for the “Enfluromatic” trademark. This record
states that its first use in commerce was June 21, 1973. The end date is
based on a company history published in a 1996 issue of Anesthesiology and
written by Richard Foregger. According to Richard Foregger the corporation
was legally dissolved on March 2, 1987. The date range could change if
documentation indicates it should be corrected.

Note Type: General
Notes: Descriptive title constructed by cataloger; The markings on this vaporizer
spell the name “ENFLUROMATIC”, but some literature uses the spelling
“ENFLURAMATIC”.

Note Type: Physical Description
Notes: One agent specific vaporizer with section cut-away to reveal the working
parts in side; The measurements in the physical description field are based
on the vaporizer in the rubber stand, and include the stand; The side with
the front facing control knob was treated as the front; Without the stand the
vaporizer measures approximately 23 x 16 x 15 cm; The increments on the front
facing control dial include, “OFF”, “0.5”, “1.0”, “[tic mark only for 1.5],
“2.0”, [tic mark only for 2.5], “3.0”, [tic mark only for 3.5], “4.0”, [tic
mark only for 4.5], “5.0”; A rectangular filling port is to the right of the
control knob; On one side of the filling port is a view screen with a line
that indicates, “FULL”; An orange manufacturer’s sticker with white text is
located below the control knob; It is marked with, “CAUTION [new line] FOR
USE WITH ENTHRANE INHALANT ANESTHETIC ONLY. [new line] DO NOT CONNECT WITHIN
REBREATHING CIRCUITS. [new line] KEEP UPRIGHT WHEN LIQUID IS CONTAINED.”;
Manufacturer markings, on an orange sticker with white text, are also on the
top of the vaporizer and include an arrow to indicate the inlet and outlet
and the direction of the flow of gas; Also marked on the top sticker are,
“ENFLUROMATIC”, “MODEL DRV 3”, “SERIAL NO. 2390”, “U.S. PAT. NO. [new line] 3
630,438 [new line] 3,420,232”, “FOREGGER”, and “MADE IN U.S.A.”

Note Type: Acquisition
Notes: Donated to the WLM by by Mr. Eddie Bowie.

Note Type: Citation
Notes: The Enfluromatic was a vaporizer calibrated specifically for the
administration of the inhalation anesthesic enflurane. It is one in a line of
‘matic’ vaporizers manufactured by the Foregger Company. The first was the
Fluomatic, designed by Allan M. Bickford (1921-2005) for Foregger around 1965
in response to agent-specific vaporizers produced by other manufacturers,
such as the Fluotec made by Cyprane Ltd. and the Vapor made by Dräger. These
earlier vaporizers were made for the administration of the inhalation
anesthetic halothane (Fluothane).

Enflurane was the first of a second generation of ‘halogenated ethers’
developed after the introduction of halothane. It was first synthesized in
1963 by Ross C. Terrell, a chemist working for Ohio Medical Products. In the
U.S., clinical trials of the new anesthetic began around 1966 and it was
approved for general use in 1972. Foregger released the Enfluromatic in June
of 1973. In 1978, Foregger was dissolved and acquired by the Puritan-Bennett
Corporation, which assumed manufacture of the line of ‘matic’ vaporizers.

A vaporizer is a device used to convert a liquid anesthetic into a breathable
form, or vapor. For more information about vaporizers see other catalog
records, such as those for the Cyprane Fluotec, Dräger Vapor, or Copper
Kettle.

This vaporizer was carefully dissected by Mr. Eddie Bowie of the University
of Chicago for use as an aid for teaching anesthesiology students and
residents. It was one of many teaching ‘cut-aways’ Mr. Bowie made, and
donated to the WLM after his retirement.