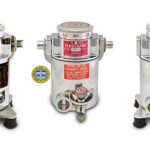 The Foregger Company was a leading manufacturer of anesthesia equipment in the United States from the 1910s through the 1950s. Its Copper Kettle vaporizer, introduced in 1952, was a major advance in technology. It was built into the anesthesia machine's breathing circuit, and could be calibrated to use any one of several liquid anesthetics.   The company did not develop substantially new vaporizers until the mid-1960s. Their most significant departure from the Copper Kettle is that they were mounted outside the breathing circuit.  Among them were the  Pentomatic, Fluomatic and Ethermatic, shown here. Each is calibrated for a single agent: methoxyflurane (brand name Penthrane), halothane (brand name Fluothane) and ether, respectively.   Their design clearly echoes the successful "tec" series of vaporizers that had been introduced by the company's British rival, Cyprane Limited, a decade earlier. Features that resemble those of Cyprane's vaporizers include the chrome housing, a control dial, a single port for both filling and drainage, and a window that shows the level of the liquid anesthetic. The new vaporizers were temperature, flow, and back-pressure compensated. Compare these to the Foregger Enfluromatic.