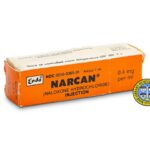 Opioid  analgesic drugs, formerly called narcotics, may be used by anesthesiologists to manage their patients' pain during and after surgery. Opioid antagonists are drugs that can limit or even reverse some of the effects of opioids. The synthesis of N-allylnormorphine (naloxone hydrochloride) was reported in 1941. The report noted its antagonistic action toward the respiratory depression caused by morphine. By the 1960s, anesthesiologists were studying the effects of naloxone on anesthetized patients. The example shown here was manufactured and sold by Endo Laboratories in the mid-1970s, under the brand name Narcan.   Since 2010, the rising number of deaths caused by the abuse of opioids in the United States has been recognized as a national emergency. Attention has focused on naloxone as a life-saving antidote. In 2020, the American Society of Anesthesiologists launched its naloxone awareness campaign, REVIVEme. This offers free public education for detection and intervention in overdoses, and tools for rescue.   Naloxone is made under several brand names, and should not be confused with the drug Naltrexone.