Bowditch NI. The ether controversy : vindication of the hospital report of 1848. 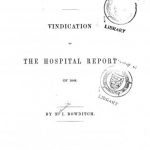 Catalog Record: Bowditch NI. The ether controversy : vindication of the hospital report of 1848.

Title: The ether controversy : vindication of the hospital report of 1848 / by N.I. Bowditch.

Abstract: Bowditch rejected Jackson’s claim for credit to the discovery by questioning the logic of Jackson’s self-described activities leading to the momentous event at MGH. This short pamphlet also describes the first testimonial in honor of the ether discovery by Morton which bore 114 signatures including all the trustees of the Massachusetts General Hospital dated May 8, 1848.

General Notes: Written in reply to Charles T. Jackson’s attorneys’ (Lord & Lord) “A defense of Dr. Charles T. Jackson’s claims to the discovery of etherization,” which appeared shortly after the publication of the Report of the trustees of the Massachusetts General Hospital, Jan. 26, 1848.

General Notes: Copies 2 and 3 located at Pam WO 278 E8 B747 1862 RB. “Pam” in the call number indicates that this item is stored in the RBR pamphlet area in an archival box, by call number.