Braid J. Observations on the nature and treatment of certain forms of paralysis, 1855. 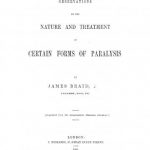 Catalog Record: Braid J. Observations on the nature and treatment of certain forms of paralysis, 1855.

Title: Observations on the nature and treatment of certain forms of paralysis / by James Braid.

Abstract: In this work Braid describes numerous cases in which he successfully administered hypnosis in the treatment of paralysis.

General Notes: “This paper, written for the Annual Meeting of the Provincial Association at York, but not read for want of time, was published in the JOURNAL by request of the meeting.” [t.p. verso.]