Denham J. A report upon the use of chloroform in fifty-six cases of labour occurring in the Dublin Lying-in Hospital, 1849. 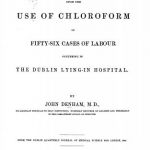 Catalog Record: Denham J. A report upon the use of chloroform in fifty-six cases of labour occurring in the Dublin Lying-in Hospital, 1849.

Title: A report upon the use of chloroform in fifty-six cases of labour occurring in the Dublin Lying-in Hospital / John Denham.

Provenance: Inscribed on title page, “To Professor White With the Author’s Best Regards.”

Abstract: Denham defines anesthesia as a scientific form of intoxication to relieve pain and to lessen the shock of surgery. Overall, he considered chloroform anesthesia safe under a competent administrator. He refutes the claim of anesthetic fatalities in obstetric patients reported by G. T. Gream, arguing that the deaths occurred after the patients had recovered from anesthesia.

General Notes: This paper was read at the Dublin Obstetrical Society, 4th January and 12th March, 1849, and subsequently published in the Dublin Quarterly Journal of Medical Science, August 1849.