Dwinelle WH. The casket and the ribbon, or, the honors of ether, 1849. 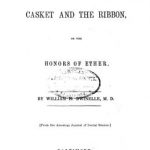 Catalog Record: Dwinelle WH. The casket and the ribbon, or, the honors of ether, 1849.

Title: The casket and the ribbon, or, The honors of ether / by William H. Dwinelle.

Abstract: Dwinelle was a supporter of William T.G. Morton in the Ether Controversy. In this document, he draws on Congressional Report No. 114 and a dissenting minority report by F.W. Lord & J.W. Jones to reiterate his support for Morton.

General Notes: The “casket” refers to a small silver box containing $1000 which was presented to W.T.G. Morton by the trustees of the Massachusetts General Hospital while he was living in poverty as a result of his dispute with Jackson. The “ribbon” refers to the award presented to Charles Thomas Jackson in recognition for his discovery of anesthesia.