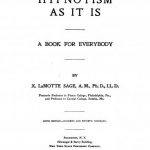 Title: Hypnotism as it is : a book for everybody / by X. LaMotte Sage.

General Notes: Cover missing and one page detached. Placed in a protective wrapper/folder.

General Notes: Multiple references to the use of hypnotism for surgery or dentistry.