Snow J. On the cause and prevention of death from chloroform, 1852. 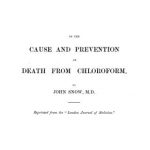 Catalog Record: Snow J. On the cause and prevention of death from chloroform, 1852.

Title: On the cause and prevention of death from chloroform / by John Snow.

Type of Trace: Reprinted from
Title: London journal of medicine.

Abstract: Snow gathered more than 20 chloroform fatalities and reviewed the
possible causes of death to aid him in designing his animal experiments
on chloroform. His investigation led him to believe that chloroform
safety was very much dependent upon its concentration in the patient’s
system. He notes that chloroform anesthesia became fatal mostly to
apparently healthy patients. He advises attention and care by the
operator to the patient during chloroform anesthesia in order to
prevent problems.