Walker IP. Answer to an examination of the question of anaesthesia, 1853. 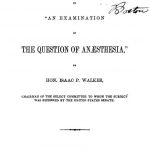 Catalog Record: Walker IP. Answer to an examination of the question of anaesthesia, 1853.

Title: Answer to “an examination of the question of anaesthesia” / by Hon. Issac P. Walker.

Abstract: Isaac P. Walker was chairman of the U.S. Senate Select Committee
charged to investigate Morton’s claim to priority of the discovery of
etherization. This treatise was written in response to a paper written
by Truman Smith, a fellow member of his committee titled An Examination
of the Question of Anaesthesia, wherein Smith expressed his sympathy
and support in favor of Horace Wells as the discoverer of anesthesia.
Walker challenged Smith arguing that Wells’ application of nitrous
oxide anesthesia had never been successful, citing several case reports.
Walker contends that Horace Wells had abandoned nitrous oxide
anesthesia because it had never been effective on the cases he had
administered. For this reason, Walker considers Wells forfeited the
right to claim the credit of discovery.

General Notes: This tract is not listed in any major bibliographies on the Controversy.