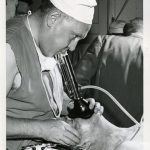 F[rederick] A. Duncan Alexander, M.D. was born in Arden, Ontario, Canada in 1908.  He was trained by Dr. Ralph Waters, the founder of the first academic department of anesthesiology in the world, at the University of Wisconsin in Madison.  He also trained at Bellevue Hospital in New York, studying under Dr. Emery Rovenstine.  He went on to become Associate Professor of Anesthesiology, Physiology, and Pharmacology at Albany Medical College in Albany, New York, while serving as director of anesthesia, gas therapy, blood banks, and physiological services at Albany Hospital.  With Dr. Charles Martin, he invented the “Alexander Mouth-to-Mouth Insufflator,” also known as the “bazooka.”  This device provided sanitary mouth-to-mouth ventilation for all patients – adults, children, and newborns.  Dr. Alexander lectured widely and was also a pioneer in pain medicine.  He was in the U.S. Air Force during World War II, serving as chief of anesthesia and operating room sections at three hospitals, including the 160th General Hospital in England.  After military service he practiced and taught in Texas and then Iowa, before returning to New York.  He died in 1983.