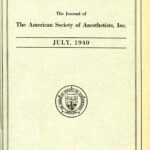 The first issue of Anesthesiology, the scholarly journal of the American Society of Anesthesiologists, was published in July, 1940. Then known as the American Society of Anesthetists, ASA adopted its current name in 1945. The members of the first Editorial Board, Editorial Committee, Contributing and Consulting Editors were a veritable Who's Who of the profession's leadership. Originally published bimonthly, monthly issues began in January, 1969. Volume 1, Number 1 was 120 pages long, with an additional 15 pages of advertisements. It contained 11 articles, and three columns that were to become regular features: Editorial, Abstracts, and Book Reviews. The articles reported clinical observations, laboratory and clinical studies. The topics ranged from physiology to specific techniques, agents (three about the newest of these, Cyclopropane), and the prevention of complications, with one opinion piece, "The anesthetist in modern medicine". There were also reports of the activities of professional organizations, including the next examination by the American Board of Anesthesiology, and the creation of the Labat Fellowship by the American Society of Regional Anesthesia. The shortest of these announcements was also the most significant: the establishment of a Section on Anesthesiology by the American Medical Association. There were 868 subscribers to the first issue. Today, Anesthesiology has over 50,000 print and online subscribers.