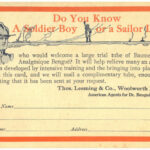 Ethyl chloride was first proposed as an inhalation anesthetic in the 1840s, but the great speed of its evaporation made it difficult to use. Then, in 1892, the French pharmacist Jules Bengué, M.D. (b. 1863) patented a spray nozzle that made it possible to apply ethyl chloride in small doses. He quickly went into business manufacturing ethyl chloride in many forms. For a few decades it was used as an induction agent for general anesthesia, but it gained its lasting fame as a topical anesthetic and analgesic.   The postcard shown here is an example of the company's brilliant marketing. When the United States entered WWI in 1917, Bengué's distributor, Thos. Leeming & Co., offered free samples of Bengué Baum Analgésique (a topical cream) to American servicemen, for easing the aches and pains of boot camp. In the U. S., Bengué's products were later given an anglicized spelling that is still in use: Bengay.