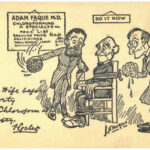 The successful English author, Anthony Trollope (1815-1882), was a social commentator.  In his satirical novel, The Fixed Period , the law of a fictional island requires everyone to retire at age 60, and to be executed one year later.   The famous physician and educator Sir William Osler (1849-1919) was a founding member of Johns Hopkins Hospital, where he created the first medical residency program. In 1905 he became Regius Professor of Medicine at the University of Oxford. In a farewell address to the faculty and alumni of Johns Hopkins, Osler made a witty reference to Trollope's book. But he misquoted Trollope, saying that the retirees were euthanized with chloroform. Newspapers throughout the U. S. then misquoted Osler, claiming that he recommended this.   The resulting public outrage was to haunt Osler for the rest of his life. Cartoons like the one that illustrates this postcard may have added fuel to the fire, even while mocking those who could not see the humor that both Trollope and Osler intended. The cartoon was drawn by  J. H. Machold in 1905.