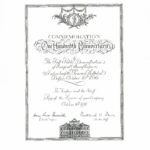 In 1811, John Collins Warren, M.D. (1778-1856) became one of the founders of Boston's Massachusetts General Hospital (MGH).  The hospital opened its doors in 1821, with Dr. Warren as its first surgeon. In 1845 the forward-thinking  Warren gave dentist Horace Wells (1815-1848) a chance to demonstrate a new idea: anesthesia. But that fell through when the patient refused the operation.   The following year, Warren gave Well's former partner, William T. G. Morton (1819-1868) the same opportunity. On October 16, 1846, Morton gave the first successful, public demonstration of modern surgical anesthesia, at MGH. The brilliant success of his demonstration led to rapid adoption of ether anesthesia around the world. The operating theater where it took place is now known as The Ether Dome. The date October 16th is known as Ether Day, and also as World Anesthesia Day.   MGH honored the centennial of that historic event with a three-day Commemoration, October 15-17, 1946. This invitation to the festivities is part of the Sydney C. Wiggin, M.D., Collection.