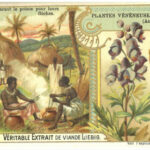 The German chemist, Baron Justus von Liebig (1803-1873) discovered chloroform in 1831.  He was one of three chemists who independently discovered chloroform. In 1865, he founded the Liebig's Extract of Meat Company in London, partnering with a meat processing company in Uruguay. For over a century, the company produced colorful advertising ephemera, including a series of trade cards that featured medicinal plants from around the world.   The example shown here features Aconitum napellus. Native to Europe, its common name, monkshood, reflects the distinctive shape of the flower. Another of its common names, wolfsbane, indicates that its leaves and roots are poisonous. Ingesting, and in some cases even touching it, can prove fatal. It depresses  both the circulatory and respiratory systems. It has also been used as a topical anesthetic, an antipyretic (to reduce fever), and a diuretic (to increase urination.) All of these actions concern anesthesiologists, who are responsible for monitoring their patients' vital signs and managing their body fluids.   Aconite was an ingredient in the drug compounded by the Japanese surgeon Seishu Hanaoka (1760-1835.)  He called his mixture Mafutsusan, and used it to administer modern surgical anesthesia in 1804. This was 42 years before the first successful demonstration of ether anesthesia.