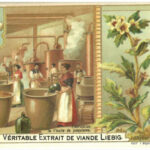 The German chemist, Baron Justus von Liebig (1803-1873) was one of three chemists who independently discovered chloroform. In 1865, he founded Liebig's Extract of Meat Company. For over a century, the company produced colorful advertising ephemera, including a series of trade cards that featured medicinal plants from around the world. The example shown here features Hyoscyamus niger, a plant that is native to Eurasia. Its common names, black henbane and stinking nightshade, indicate the fact that all parts of the plant are poisonous. Ingestion can prove fatal.   For thousands of years H. niger has been used to treat respiratory ailments and painful conditions. It is one of several plants from which the central nervous system stimulant, atropine, and the sedatives hyoscine and scopolamine can be obtained. In modern times it has been used in sedatives and heart stimulants, as well as antisialagogues (to dry the mouth), antiemetics (to reduce nausea) and mydriatics (to dilate the pupil of the eye.) All of these actions concern anesthesiologists, who monitor their patients' vital signs. Its many other effects include hallucinations, tachycardia and convulsions.