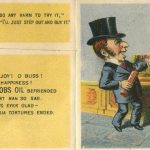 Monkshood is a common name for plants in the Aconitum genus. Used for centuries by Native American and Asian archers as arrowhead poisons, the deadly alkaloids of the monkshood root were compounded into one of America’s most widely advertised quack liniments of the 1880s. Containing 2% aconite in a turpentine–ether–alcohol tincture, this “antineuralgic” was sold as Sankt Jakob Oel in Germany and as “St. Jacob’s Oil” in English-speaking nations. Spuriously advertised as being prepared by German monks from the Black Forest, this panacea for rheumatism, sciatica, and other painful conditions was distributed by suppliers in Maryland, Ohio, and New York. Definitely not for internal use, as a topical application it may have caused numbness. The Dutch-door–like metamorphic advertising card shown here promises that sufferers whom “St. Jacob’s Oil befriended” would find “Neuralgia tortures ended.”