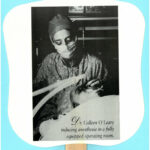 The American Society of Anesthesiologists (ASA) was founded in 1905 by a small group of specialist physicians and medical students in Long Island, New York. It was restructured as a national organization in 1936, and adopted its present name in 1945. ASA's Constitution calls for the Society "to encourage and promote the organization and affiliation" of related associations. The New York State Society of Anesthesiologists (NYSSA) was chartered on February 28, 1948 as a Component Society of ASA.   Among its many activities, NYSSA sponsored an anesthesiology exhibit at the New York State Fair. The Fair is held each year in August, and attracts an estimated 1,000,000 visitors. The fan shown here was made as a souvenir of the 1991 exhibit. On one side is a photograph of a physician anesthesiologist at work in an operating room. The other side lists what a patient should tell the anesthesiologist, including his or her regular medications, previous operations, allergies and smoking history. All of these are taken into account when choosing the right anesthetic for that patient's next surgery. The fan shown here was donated by Colleen O'Leary, M.D.