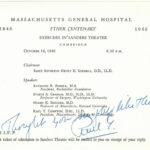 William T. G. Morton, M.D. (1819-1868) gave the first successful, public demonstration of modern surgical anesthesia at Boston's Massachusetts General Hospital (MGH) on October 16, 1846.  MGH honored the centennial of that achievement with a three day Commemoration, October 15-17, 1946.  One of the events was the formal Exercises held on the 16th. The program featured four eminent speakers. These were anesthesiologist Henry K. Beecher, M.D., who developed the protocol for informed consent, surgeon Evarts A. Graham, M.D., ScD., LL.D., a co-founder of the American Board of Surgery, Raymond Fosdick, M.A., LL.D., President of the Rockefeller Foundation, and physicist Karl T. Compton, Sc.D., LL.D., President of the Massachusetts Institute of Technology.   This ticket to the Exercises is part of the Sidney C. Wiggin, M.D. Collection.