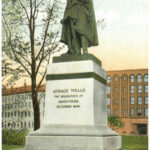 Dentist Horace Wells (1815-1848) practiced in Hartford, CT. He attended a demonstration of the effects of inhaling nitrous oxide in December, 1844, and realized that he could use this to relieve his patients' pain during dental procedures. The following month he gave a demonstration of the technique in Boston. But the patient cried out, and Wells went home discouraged. Wells continued to experiment, and told his former partner, William Morton (1819-1868) about it. Morton went on to conduct the first successful public demonstration of modern surgical anesthesia, in 1846.   A fierce battle over the credit for this discovery ensued, and the question is still debated today. While Morton gets the lion's share of recognition, Wells' contribution has been honored in many tributes and monuments. In 1874, the statue of Wells  depicted here was commissioned jointly by the Connecticut General Assembly, the Connecticut State Dental Commission, and the City of Hartford. Created by the sculptor Truman Howe Bartlett (1835-1922), it was dedicated in Hartford's Bushnell Park in 1875. This postcard was published by Reichner Brothers, between 1906 and 1914.