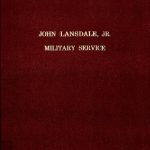 A Military Service might seem a bit unusual to be included in a library-museum of anesthesiology, but further examination of this memoir by John Lansdale, Jr. reveals a not well known and important account of his World War II service as an active participant in the Manhattan Project. Subsequently, he served for a third of a century as the lead counsel for the American Society of Anesthesiologists which is also chronicled in an interview that can be obtained under the Living History section of the Wood Library-Museum website.

Permission to share this treasure has been obtained from his family, for which it was primarily recorded.

Abstract: The diaries and recollections of John Lansdale part in the creation of
the atomic bomb.

General Notes: “John Lansdale Jr. was the legal counsel of ASA dating back to the
post-World War II era. He also helped the WLM draft the affiliation
document with the ASA in the early 1970s when it became a section of
the ASA. Mr. Lansdale was a career military officer trained at the
Virginia Military Academy, and received his law degree at Harvard.
Before his association with the law firm Squire and Dempsey in
Cleveland, he headed the security division of the U.S. Army command,
and was in charge of security details of the Manhattan Project. This
privately printed book, simply titled “Military Service,” was written
in 1987. Lansdale discusses national security, which he was intimately
involved during the development of the atomic bomb. Mr. Lansdale cited
important classified documents, which have since been de-classified, to
write his story, and included them as appendices in his book.”–
Patrick Sim, Librarian’s Report, WLM Board of Trustees Meeting, Aug.
14-15, 2003.

General Notes: Donated to the WLM by Michael Scott of the ASA Washington Office, 2003.

General Notes: Free endpaper inscribed to Mike Scott, and signed, by the author.