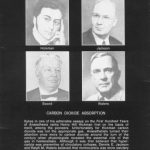 W. Stanley Sykes, in one of his admirable essays on the First Hundred Years of Anaesthesia, ranks Henry Hill Hickman first on the basis of merit, among the pioneers.  Unfortunately for Hickman carbon dioxide was not the appropriate gas. Anaesthetists turned their attention once more to carbon dioxide around the turn of the century when physiologists revealed the essential role of that gas in homeostasis.  Although it was first believed that hypercarbia was preventive of circulatory collapse, Dennis E. Jackson and Ralph M. Waters believed that normocarbia was more salutary during anesthesia. Jackson demonstrated the efficacy of carbon dioxide absorption during closed system anaesthesia in the dog while, later on, Waters introduced the technique in man. Brian C. Sword advocated the circle rebreathing system as being more convenient that Waters' to and fro apparatus. Anaesthetists today have lost sight of the advantages of rebreathing: economy, conservation of body heat and water, and avoidance of atmospheric pollution.

Content Notes: [1] Letter on suspended animation… / by H. Hickman, 1824 — [2] A new method for the production of general analgesia and anaesthesia with a description of the apparatus used / by D.E. Jackson, 1915 — [3] Clinical scope and utility of carbon dioxide filtration in inhalation anesthesia / by R.M. Waters, 1924 — [4] Closed circle method of administration of gas anesthesia / Brian C. Sword, 1930.