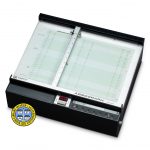 Anesthesiologists are responsible for monitoring and maintaining the patient's vital signs during surgery. The American pharmaceutical company, Abbott Laboratories, was founded in Chicago in 1888. The company formed a joint venture with Space Craft, Inc., of Huntsville, Alabama, in 1969, creating the Abbott Medical Electronics Company (AMEC.)  AMEC became a wholly owned subsidiary of Abbott Laboratories in 1973.

In 1972, AMEC introduced its new, multiple-function patient monitor, the Abbograph Recorder. The Abbograph could simultaneously monitor the administration of anesthetic gases, as well as twelve physiological functions, including heart rate, respiration, body temperature and four separate pressures (systolic, diastolic and mean blood pressure, and venous pressure.) These were automatically recorded on specially-printed chart paper. The apparatus was produced into the 1980s. It was marketed for use by anesthesiologists during surgery and recovery, and in the intensive care unit.