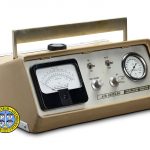 Anesthesiologists are responsible for monitoring the patient's vital signs during surgery. One of the first devices that allowed the operator to monitor more than one function at a time was the Ploss Valve, introduced in 1955. In the 1960s, a number of manufacturers produced electronic instruments capable of continuously monitoring several vital signs simultaneously.

Air-Shields, Inc. was founded in 1939 in Hatboro, Pennsylvania, where it continued to be based until 2004, when it was acquired by Dräger Medical. Best known for its incubators, Air-Shields also made ventilators, patient monitors and other medical equipment. In 1960, the company advertised three new continuous monitors for cardiac patients. One of these tracked both pulse and temperature, another tracked both pulse and blood pressure. The third could track blood pressure and, at the turn of a switch, either pulse or temperature.

The Air-Shields Pulse-Blood Pressure-Temperature Monitor, shown here, was also called the Model PTB-2. It was equipped with a blood pressure cuff, a pulse meter that would be attached to the patient's finger, and a temperature-reading probe that could be positioned in the patient's mouth … or elsewhere.