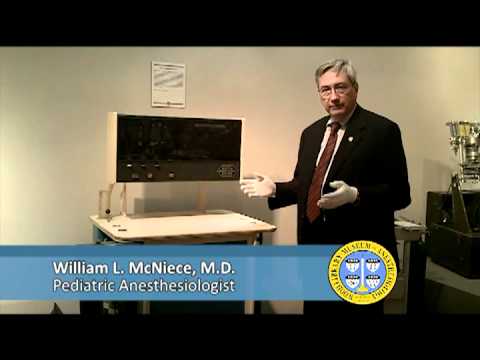 The Boston Anesthesia System (BAS) is a prototype developed in the early 1970s that tested two major changes in anesthesia machine design. It was the first anesthesia machine engineered by way of human-factors studies, and the first with computer-based operations. Some of the functions assisted or controlled by the computer include the electronic display, the flow of gas and liquid anesthetic, the oxygen-to-anesthetic ratio, and the alarms, with programmable limits for breathing system pressure, anesthetic gas flow, oxygen concentration, and battery function. The BAS was displayed at the 1976 annual meeting of the American Society of Anesthesiologists (ASA), and received an ASA Scientific Exhibit Award. Although never commercially produced, the BAS prototype informed the development of anesthesia machines that came after it. Fully electronic anesthesia machines became commercially available in the late 1980s.

Note Type: Physical Description
Notes: This description is based on the perspective of a user facing the front of
the machine, i.e. “left” is the user’s left, “right” is the user’s right;
Anesthesia machine with a cabinet-like base and electronic display console;
The upper console is flat, set back, and raised approx 20 cm above the
cabinet on two thin supports; When the machine is on and in use, illuminated
bar-graphs, scales, and labels display on the left side of the console, and
illuminated alarms and warnings display on the right side of the consol; When
off, the surface of the consol is black; Three switches, called
‘increment/decrement’ switches by the designers, are located in the left
lower portion of the console; The switches are each of a different color;
From left to right the colors are white, blue and red; There are three push
button switches on the lower edge of the console; From left to right the push
buttons are labeled, “HIGH FLOW [new line] “LOW FLOW”, “ANESTHESIA [new line]
CUT-OFF”, and “VENT- [new line] ALARM”; In the lower right corner of the
consol is an irregular hexagon which contains the text, “BOSTON [new line]
ANESTHESIA [new line] SYSTEM”; The consol measures approx 35 x 70 x 16.5 cm;
A thick electrical cord exits the back of the consol and enters the cabinet
through a hole in the far back of the cabinet’s table top; The table top
extends beyond the body of the cabinet on the left and right sides by approx
12.5 cm; The table top measures approx 2 x 81 x 64 cm; The cabinet, with
top and wheels, measures approx 94 x 81 x 64 cm; On the left side of the
cabinet from front to back are a swiveling arm for the breathing circuit, 2
yolks for oxygen (O2), a release lever, and a volatile anesthetic injector
system; The arm for the breathing circuit includes ports, an O2 sensor, an
airway pressure sensor, and rebreathing bag; The breathing circuit it marked
with, “BIOENGINEERING UNIT-ANESTHESIA [new line] HARVARD MEDICAL SCHOOL [new
line] MASSACHUSETTS GENERAL HOSPITAL”; The release lever is topped by a small
red, circular handle, and protrudes through a hole in the cabinet’s top; The
volatile anesthetic injector system is encased in a rectangular cover made of
the same materials as the cabinet; The opening to the injector is through a
round hole in the top of the cabinet; Through this hole canisters, prefilled
with liquid anesthetic, can be plugged into the injector system; On the right
side of the cabinet are 2 yokes for anesthetic gas; Also on the right side of
the cabinet are two neoprene hoses for piped anesthetic gas; The front of
the cabinet has three sections (an upper panel, a drawer, and a lower panel);
The upper front panel measures approx 13.5 cm in height; In the upper front
panel from left to right are an outlet labeled, “COMMON OUTLET”, a green push
button labeled, “OXYGEN FLUSH”, a rotameter flowmeter labeled “FLOW”, two
Foregger pressure gauges labeled “RESERVE-CYLINDER PRESSURES”, and a key
operated on-off switch labeled “POWER”, and “ON” and “OFF”; The flow meter is
marked, “PERCENT OF MAX FLOW”, with increments of five from 10 to 100; The
O2 pressure gauge is marked in increments from 0 to 3,000 psi; The N2O
pressure gauge is marked in increments from 0 to 1500 psi; Below the upper
front panel is a drawer approx 9 cm in height; The lower font panel is
closed; The inside of the cabinet, where all of the computer hardware and
wires are held, is accessible via a door in the back; The cabinet sits on
four lockable wheels; With two 200 cc plastic canisters for liquid
anesthetic; One is labeled “ENFLURANE” and the other is labeled “HALOTHANE”;
Both have graduation markings in increments of 25, from 50 to 200; The
canisters measure approx 12 x 6 x 8 cm ; Although the canisters are empty,
they were designed to be prefilled with liquid anesthetic by a manufacturer.

Note Type: Acquisition
Notes: Donated to the WLM by Jeffrey B. Cooper.

Note Type: Historical
Notes: The Boston Anesthesia System (BAS) was a prototype developed in the early
1970s that tested two major changes in anesthesia machine design. It was the
first anesthesia machine engineered by way of human-factors studies, and the
first to incorporate computer based functionality (Bause, 2011 ; Kitz, 2006).
Functions assisted or controlled by the computer include the electronic
display, the flow of gas and liquid anesthetics, the oxygen-anesthetic ratio,
and the alarms, with programmable limits, for breathing system pressure,
anesthetic flow, oxygen concentration, and battery function (Cooper, Newbower
Moore, & Trautman, 1978). In 1976 the BAS was on display at the ASA annual
meeting and received an ASA Scientific Exhibit Award. Although never
commercially produced, the BAS prototype informed the development of machines
that came after it. Fully electronic anesthesia machines became commercially
available in the late 1980s (Kitz, 2006).