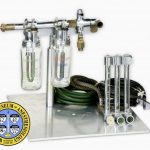 Dr. Henry E. G. Boyle (1875-1941), a leading English anesthetist, invented a nitrous oxide, oxygen and ether anesthesia machine in 1917. It was based on the design of the Gwathmey Apparatus, using a "bubble through" or "sight feed" vaporizer. The gases were routed through two perforated tubes in a glass mixing chamber containing water. The rate of flow could be estimated by observing the force of the resulting bubbles. This became widely known as the Boyle Bottle. The Boyle machine continued in production for over 50 years, while the Boyle Bottle became a standard feature of British anesthesia machines. The anesthetic agent, halothane (Fluothane) was introduced in Great Britain in 1955. The American anesthesiologist, Dr. Ephraim Siker (1926-) became familiar with halothane while working at the Cardiff Royal Infirmary, in Cardiff, Wales. When he returned to Pittsburgh, PA, he brought a supply of halothane with him, along with this Boyle apparatus. He used it to deliver the second halothane anesthetic in the United States, in 1958. Halothane quickly grew in popularity, because it offered a non-explosive alternative to ether and cyclopropane.

Note Type: General
Notes: Title based on the WLM name for the object.

Note Type: General
Notes: The possible date range for year of manufacturer is based on dates provided
by K. Bryn Thomas (1975), Adolph H. Giesecke (2008), and on accession
information.

Note Type: With
Notes: With 3 textile gas hoses: one green, one black, and one black and white.

Note Type: Citation
Notes: Thomas KB. The Development of Anaesthetic Apparatus : A history based on the
Charles King Collection of the Association of Anaesthetists of Great Britain
and Ireland. Oxford. Blackwell, 1975:142-151.

Note Type: Physical Description
Notes: This assembly consists of two vaporizers joined to a back bar, and a
three-tube rotameter bank; Both vaporizer heads are of the variable bypass,
draw-over or bubble-through type, with control levers, plungers, and U-tubes;
The control levers are semicircular and marked with 3 lines between the On
and Off positions; When viewing the front of the assembly, the glass jar, or
bottle, on the left is marked “Chloroform” in green lettering, and below the
text are water-level markings in increments of four “DRMS”, from 4 to 32; The
jar on the right is marked “Chloroform [new line] OR” in red and [new line]
“Trilene” in blue, and below the text are water-level markings in increments
of one, from 1 to 4; The back of the ‘Chloroform or Trilene’ bottle is marked
with the Medical & Industrial Equipment Ltd. trademark symbol; The glass jars
are 15 cm in height and 6 cm in dia. at the widest points; Both of the heads
are marked “Patent No [new line] 268454 [new line] 331050 [new line] COXETER
[new line] LONDON”; The back bar (to which the vaporizer heads are joined
with) is held up by a vertical, metal bar, 33 cm in ht, fastened to an
aluminum base that measures approximately .5 x 38 x 38.5 cm; Sitting to the
right of the vaporizers on the base but not secured to the base, is a
three-tube, rotameter-type flowmeter bank; The meters are arranged with “O2”
on the left, “CO2” in the middle, and “N2O” on the right; The oxygen and
carbon dioxide tubes are marked from 100 to 2000 cc/min; The nitrous oxide
tube is marked from 1 to 10 lpm; The knob for oxygen is a dingy white; the
knob for carbon dioxide is green; The knob for nitrous oxide is black; The
rotameter has manufacturer’s markings: “A Charles King, Ltd”.

Note Type: Historical
Notes: This is a Boyle Anesthesia Apparatus that Dr. Ephraim Siker brought back to the US after working at the Cardiff Royal Infirmary, in Wales. It includes two ‘Boyle Bottles’ (vaporizers) and three rotameters (flowmeters).

The first Boyle Anesthesia Apparatus was designed by Dr. Henry E. G. Boyle (1875-1941), a leading English anesthetist. He introduced his new nitrous oxide, oxygen and ether anesthesia machine in 1917. It was based on the Gwathmey & Woolsey Apparatus, and an apparatus designed by Sir Geoffrey Marshall during WW I. Boyle became an eponymous trade name for a line of anesthesia machines made for over 50 years, first by Coxeter and later by the British Oxygen Company.

The anesthetic agent, halothane (Fluothane) was introduced in Great Britain in 1956. Dr. Siker became familiar with it while working in Cardiff. When he returned to Pittsburgh, PA, in addition to this apparatus, he brought a supply of halothane with him. In 1958, Dr. Siker used it to deliver the second halothane anesthetic in the United States. Halothane quickly grew in popularity, because it offered a non-explosive alternative to ether and cyclopropane.