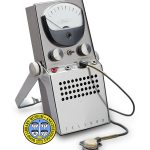 Founded in the 1940s, Burdick Corporation, of Milton, Wisconsin, manufactured heart monitors and other medical devices.

The Burdick Telecor cardiac monitor, also called the TC-20, was used from the late 1950s through the 1960s. It functioned only as a pulse meter. The device detected and registered cardiac arrest or arrhythmia (irregular heartbeat) in two ways. Hypodermic electrodes transmitted a signal of the heartbeat that was visually displayed on a gauge, and a transducer strapped to the patient’s fingertip gave an audible signal of the pressure of the pulse.  The device was battery-powered, and came equipped with an earphone (missing in this example) to be worn by the anesthesiologist. The handle allowed it to be suspended from a hook, or placed upright on a tabletop.

Note Type: Physical Description
Notes: One pulse monitor; Described with the handle fully extended as if for
suspension in fully upright position; The base or foot of the unit is
sharply angled inward toward the back, so that the front of the unit is 2.5
cm longer than the back; The unit cannot stand on its base without support;

The handle consists of a flat “strap” of metal held in place by two knobs,
one on each side of the device; The knobs do not turn but enable the handle
to swivel up and down from a vertical position (used to suspend the device)
to one that forms an acute angle at the back of the device (used to hold it
in a semi-upright position on a flat surface); Exclusive of the handle, the
height of the device is 20 cm; When the handle is bent fully downward the
standing height of the unit is 18.5 cm;

The face of the device has three zones; Most of the upper zone is occupied by
a needle gauge marked “1, 3, 5, 7, 9”; Below these numbers, the gauge bears
the “Burdick” logo; The face of the gauge has a plastic cover; Also within
this upper zone, but below the gauge, there are three controls; These are,
from left to right: a dial labeled “Off” and “Sensitivity”, a toggle switch
labeled “E” on the left (for use with the electrodes that should accompany
the device) and “P” on the right (for use with the fingertip pulse sensor),
and a dial labeled “Sound Volume”;

Below this, the second zone is angled sharply so that its bottom edge stands
1.5 cm. outward from the plane of the upper zone; This zone holds three
electrical jack receptacles: that on the left is labeled “E”, that in the
middle is labeled “P”, and that on the right is labeled “PH” (for use with
the earphones that should accompany the device);

The component that was photographed as plugged into the receptacle marked “P”
is a total of 238.75 cm long; This consists of a plastic-coated wire with a
jack (2 cm deep) at one end and a hub containing two prongs (1.5 cm long) at
the other; These prongs fit into a removable sensor; The sensor is circular
and is made of metal, plastic and rubber; When in use, this sensor would be
strapped to the patient’s finger; The example of the sensor that was chosen
to accompany this unit for purposes of photography is set into a flat metal
plate that measures 1 cm x 1 cm; On its upper surface, this sensor has been
etched “G. J. Potter M.D. [new line] and “Best c Best”;

Below the angled, center zone, the upper half of the third zone is occupied
by a grid of holes that covers a speaker; At the foot of this zone the device
is marked “TELECOR”;

Note Type: Historical
Notes: In 1957, Drs. Clarence Herbert, John Severinghaus (born 1922) and Leo Radigan
working at the National Institutes of Health, coauthored a paper describing
their research into the management of patients during hypothermia. To conduct
this research they used an instrument built by Dr. Severinghaus. That same
month, Dr. Severinghaus published a detailed description of the instrument,
“intended for use in anesthesia or physiological experimentation, obtaining a
variety of information transmitted from the heart and body core…. through
an esophageal catheter probe. The information obtainable through this probe
consists of an electrocardiogram, body temperature, and stethoscopic sounds
of cardiac and respiratory activity” (page 145).

In one memoir, Dr. Severinghaus noted that, as a government employee, he
could not patent this invention. He stated that “Burdick Corporation (Milton,
WI) agreed to market it. They liked the name I gave it, Telecor, but dumped
my design and built a finger tip monitor that chirped. It was useless.”
(Severinghaus, 2009, p. 722).

Founded in the 1940s, Burdick Corporation, of Milton, Wisconsin, manufactured
medical devices, including cardiac monitors. The company changed hands
several times, and in 2013 the Burdick line of cardiac equipment was acquired
by Mortara Instrument, Inc., of Milwaukee, WI. The Burdick Telecor cardiac
monitor, also called the TC-20, was mentioned in articles appearing in
medical journals dating from 1958 through 1970. It functioned only as a pulse
meter. The device detected and registered cardiac arrest or arrhythmia in two
ways. Hypodermic electrodes (missing from this example) transmitted a signal
of the heartbeat that was visually displayed on a gauge, and a transducer
strapped to the patient’s fingertip gave an audible signal of pulse pressure.
The device was battery-powered, and came equipped with an earphone (missing
from this example) to be worn by the anesthesiologist. The handle allowed it
to be suspended from a hook, or placed upright on a flat surface.