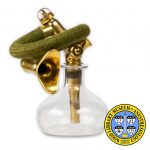 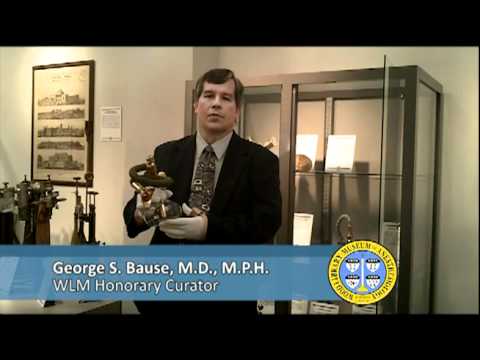 Joseph Charrière (1803-1876) was a respected cutler and surgical instrument maker in Paris. In fact, many of the early medical instrument makers were cutlers. Charrière devised his first anesthesia inhaler based on a Morton inhaler that had been sent to a recent graduate of Harvard Medical School. This was Francis Willis Fisher, M.D. (1821-1877), who was in Paris for post-graduate surgical training. On January 20, 1847, three months after W.T.G. Morton’s first demonstration of ether anesthesia in Boston, a Charrière inhaler was successfully used for several operations in Paris. Depicted here is the 3-way model that Charrière popularized later that year.

Note Type: General
Notes: Title from markings on inhaler and from the WLM title for the apparatus.

Note Type: With
Notes: With a wooden carrying case.

Note Type: Physical Description
Notes: Inhaler composed of a bulbous, glass flask, approximately 14 cm in diameter
at the widest point; A brass tube extends almost to the bottom of the flask,
is held firmly in place at the neck of the flask where the brass tube widens,
and is partially wrapped with a thin layer of textile; The neck of the flask
and wide portion of the tube form a sort of seal; Just below the neck of the
flask, is an opening in the tube that is not connected to the passage that
opens at the end of the tube near the bottom of the flask; Just above the
neck of the flask, the tube connects to a larger, central, ‘mechanical’
portion of the inhaler; The central portion is also brass; On one end of the
central portion is an opening surrounded by a short brass tube; On the other
end is a turn-key with an arrow or marker at its base; On the central portion
of the inhaler, next to the arrow and turn-key, are setting marks: “0 4 3
2 1 F”; A second opening is just left of the setting marks, and has its own
mark: “AIR PUR”; Turning the key causes sliding adjustments to alter the size
of the two openings on the central portion; Above the opening, nearer the
turn-key, is a cylindrical brass extension which exits the central portion at
an angle; At its end is a cork ball expiratory valve; Within the extension,
and not visible, is an inspiratory valve; On one side of the extension is a
round brass connector attached to a braided textile-covered hose; There may
be an inner hose of leather; A brass mouthpiece and connector are at the
proximal end of the hose; Markings on front of the turn key are difficult to
read, but include “DEPOSE”; Markings stamped on back of the turn key read,
“CHARRIER [new line] A. PARIS”; Markings stamped on the mouthpiece read,
“CHARRIER”.

Note Type: Acquisition
Notes: Purchase made possible by Dr. George Bause, the WLM honorary museum curator.
The Bause family generously financed the purchase in the interim, and Dr.
Bause flew to Montpelier, France, at his own expense, to inspect the inhaler
and navigate French customs procedures to bring the inhaler to the WLM.

Note Type: Historical
Notes: Charrière was a respected cutler and surgical instrument maker in Paris. He
devised his first inhaler based on a Morton inhaler that had been sent to
Francis Willis Fisher, a young Boston surgeon studying in Paris (Defalque,
Wright, 2008; Zimmer, 1996). In just a few weeks, Charrière made a number of
prototypes (Zimmer, 1996). This is an example of the well known 5th model. On
January 20, 1847, this model was successfully used for several operations in
Paris. The only other example of this inhaler known to exist in the world
today is in a Paris museum.