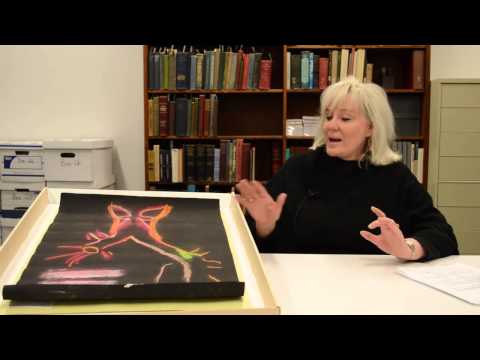 Chevalier Jackson, M.D. (1865-1958) is considered the father of bronchoscopy, esophagoscopy and laryngoscopy.  His many inventions include the first modern laryngoscope, and the techniques which he developed for extracting foreign bodies from the throat saved countless lives.  At the peak of his career, Dr. Jackson held simultaneous faculty appointments in five medical schools in Pennsylvania.  He came out of retirement to teach U.S. Army medical corps trainees during WWII.  In 1943, Dr. Jackson used both hands at once to draw this illustration of the human airway for one of his lectures.

Note type: Provenance
Notes: Dr. Nicholas Samponaro, the original owner of the pastel, acquired it while
enrolled in a post-graduate course taught by Dr. Jackson at Temple
University.

Note type: Publications about
Notes: This drawing by Dr. Jackson was featured in an Anesthesiology Reflection, in
the journal Anesthesiology, by George Bause, MD (citation: Bause G. An
airway pastel by Chevalier Jackson. Anesthesiology. 2011:115(2);374.).