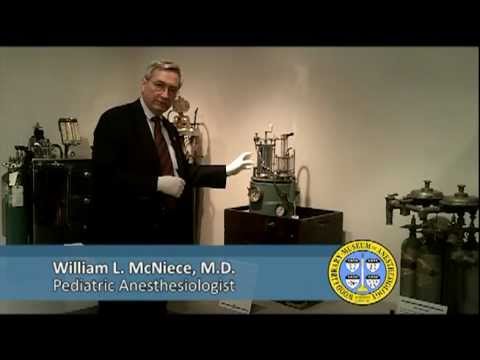 This was the first anesthesia apparatus developed to deliver known percentages of ether, nitrous oxide, and oxygen. It was also intended to be used for artificial respiration and oxygen therapy. Dr. Karl Connell (1878-1941) was a surgeon with superb mechanical skills who invented several types of anesthesia equipment. Like the popular intratracheal devices of that era, the Anesthetometer came equipped with a motorized air compressor. But its finely calibrated controls set a new standard. Connell described the first, cylindrical model of his Anesthetometer in 1912. By 1915, he had introduced a new, rectangular version. The model shown here appears to be an intermediate stage between those two designs. Both the cylindrical and rectangular models of the Anesthetometer used the body of a meter built to supply and measure gas for household lighting.

Note Type: General
Notes: Title based on the WLM name for the object and on references to the apparatus
in literature. The date is a best estimate based on a number of references.
Please contact the WLM collections supervisor for more information.

Note Type: Physical Description
Notes: An anesthesia apparatus composed of a rectangular illuminating-gas meter
modified with an ether reservoir and vaporizing chamber; This description is
based on the perspective of a user facing the front of the device, i.e.
“left” is the user’s left, “right” is the user’s right; The exterior of the
meter is painted a cream color and has a gauge at the center top; The gauge
is round and marked in increments from 0 to 9; Other markings on the gauge
include “10 LITRES [new line] SUPERIOR METER CO. [new line] BROOKLN [new
line] N.Y.”; Inside the gauge are three smaller round gauges marked, from
left to right, “10 METRES”, “1 METRE”, and “100 LITRES”; A cylindrical
electrical unit with a turn knob, or dial, is attached to the meter just
below and to the right of the gauge; In the electrical unit, to the right of
the knob is a small, viewing glass; Through the viewing glass the setting for
the hot plate is visible; The four setting options are, “LOW”, “MED”, “FULL”,
and “OFF”; In the center of the gas meter is a brass medallion; Marked around
the outer ring of the medallion is “SUPERIOR METER” and “BROOKLYN, N.Y., CO.
“; Marked in the center of the medallion is “5 [new line] LIGHT METER [new
line] 5417″; On top of the gas meter is a metal platform; An ether reservoir
sits on the left side of the platform, and a vaporizing chamber sits on the
right; On top of and to the right of the ether reservoir are the a mechanical
controls for the concentration of ether; The controls include a revolving
disk punctured with a holes in a spiral pattern; The holes are labeled with
numbers, 12, 18, 26, 30, … 79, 85, 90, 97”; The disk is also marked with,
“VAPOR TENSION ETHER M.M. OF H.G.”; A pin on a reticulated arm attached to
the top of the ether reservoir moves so that the pin may fit in any of the
holes; A handle at the top of the ether reservoir turns a simple gear that is
also on top of the reservoir; A meter inflow spout, to the left of the
platform, attaches directly to the left side of the gas meter.

Note Type: Historical
Notes: The Anesthetometer was the first anesthetic apparatus developed to deliver
known amounts of ether and nitrous oxide. Karl Connell (1878-1941), a surgeon
with superb mechanical skills, described the Anesthetometer in detail in a
1913 article published in the journal Surgery, Gynecology and Obstetrics. In
this article he reports that, “The instrument in its present form has been in
continuous use at the Roosevelt Hospital for the past six months. It is an
evolution from a year of experiment on the various mechanical mechanism”
(Connell, 1913, p. 3). Of the term “Anesthetometer” he wrote, “This word has
been coined, in the lack of an existing term, to designate an apparatus or
instrument for the automatic measuring and mixing of vapors and gases used in
anaesthesia and for other purposes” (Connell, 1913, p. 1). Although Connell
designed the Anesthetometer for the delivery of known percentages of ether
and mixed proportions of gases, he also envisioned its use in artificial
respiration and oxygen delivery (Connell, 1913, p. 9). Within the WLM
collections are also Anesthetometers with cylindrical gas meters as shown in
the 1913 article. Although Connell developed a variety of devices, including
the Connell Gas Oxygen Apparatus and an oral airway, he may be best known for
the gas mask he created to protect U.S. soldiers during WWI. Known as the
“Connell” or “Victory” mask, it earned him a Distinguished Service Medal from
the United States War Department in 1923.