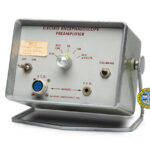 Anesthesiologists observe the patient's condition during and after surgery. This can include monitoring  the effects of anesthetics on the heart, brain, blood chemistry, consciousness and more.   Mr. John F. Dallons founded a neon glass-blowing business in Redondo Beach, CA in 1931. Around the time of the United States' entry into WWII, the company changed its name to Dallons Laboratories,  and moved to Los Angeles, CA. Their medical products included various patient monitors. The company was acquired by Balwin Technology Co. in 2020, and is now known as Western Quartz.   A preamplifier converts a weak electrical signal into one that is stronger. The Dallons preamplifier was intended for use with the company's cardioscope, which monitored the heart's action by displaying an electrocardiogram (also called an EKG.) By 1959, the Dallons cardioscope also had the added capacity to monitor electrical activity in the brain by displaying an electroencephalograph (also called an EEG.) By using the switch on the preamplifier panel, either the EEG or EKG signal was traced on the screen of the cathode ray tube.