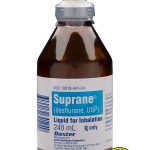 Inhaled anesthetics enter the blood and tissues along with oxygen.  Those that are less soluble act more quickly. The man-made liquid anesthetic, desflurane was synthesized in the 1960s; but its properties were quite different from those of other anesthetics, posing challenges that caused it to be shelved.  One of those properties was its low boiling point, which made it incompatible with existing vaporizers.  Renewed interest in desflurane began in the 1980s when anesthesiologists were increasingly caring for patients in day-surgery or outpatient settings.  So that patients could recover and return home in a timely manner, anesthesiologists needed an anesthetic that would ‘wear-off’ quickly. Under the brand name Suprane, desflurane was clinically introduced around 1991.  A new vaporizer that was specifically designed for this agent, the Tec 6, became available in 1993.  Desflurane’s low solubility in blood makes it the most rapidly acting anesthetic in current use.  It has the added advantage of interacting less than do other anesthetics with the carbon dioxide absorbent used in closed circuit machines. Unlike some earlier inhalation anesthetics,  desflurane does not impact the ozone layer.