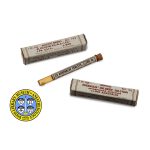 Epinephrine, also known as adrenaline, is a hormone and neurotransmitter that has numerous functions in the body, acting on the heart, blood vessels, lungs, and other tissues.  The first extracts from the adrenal gland were made in 1895, and epinephrine was first synthesized in 1904.  Among its many effects, it acts as a vasoconstrictor, stimulating the heart and increasing blood pressure.  It has been used to treat heart disease and anaphylaxis (a severe allergic reaction).  Epinephrine has also been used in combination with some local anesthetics, because its action slows the absorption of anesthetics, making their effects last longer, and also decreases bleeding.  In the 1930s, Paul M. Wood, M.D.  (1894-1963) conducted research with this and other central nervous system stimulants.  The examples seen here were collected by Dr. Wood.