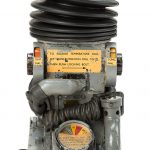 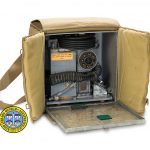 The Epstein Suffolk Oxford Inhaler (E. S. O.) is a temperature-compensated circle-breathing apparatus for chloroform anesthesia.  It was made for use by British parachute troops in WWII.  The well-padded case has arm straps, to help the medic hold the box to his chest while falling.  It was developed around 1942 in the Nuffield Department of Anaesthetics at the University of Oxford.  Just one year earlier, the Department had created the Oxford Vaporiser for administering ether in the field.  The E. S. O. is named for its designers, physicist H. G. Epstein and chemist S. F. Suffolk. Despite the risk of cardiac arrest in some patients, chloroform was judged to be a safer alternative to explosive ether for transport by parachute.

Note Type: General
Notes: The early year in the date range for the possible year of manufacture of this
inhaler is based on the year that the manufacturer began production. The
end-year is an estimate based on the end of WW II and on the specific
purposes of the design and manufacture of the object: It was made
specifically for airborn troops and the administration of chloroform. It
seems likely that there was little demand for the product beyond this niche.
The date range could change if documentation, or expert opinion, indicates
that it should be corrected. The Longworth Scientific Instrument Company
began to manufacture the Macintosh Laryngoscope in 1944, and it became the
companiy’s primary product.

Note Type: General
Notes: The manufacturer information came from the book on the history of the
Longworth Scientific Instrument Company and the annotated catalog, “No
Laughing Matter: Historical Aspects of Anaesthesia”.

Note Type: Physical Description
Notes: One rectangular steel[?] vaporizer, held in a metal case and a cushioned
canvas pack; The measurement in the physical description field is of the
cushioned canvas pack and includes the backpack straps; A colorful
temperature thermometer is set on the base in front of the inhaler; On the
front of the inhaler, a temperature dial is located on the left (When in
operation the temperature dial was set to match the temperature of the
thermometer.); A concentration control dial is located on the right side of
the front of the inhaler; A rubber concertina bellows sits on top, and the
port for adding chloroform is located on top just behind the bellows; The
only markings on the inhaler are a few operational instructions; The inhaler,
with bellows in natural position measures approximately 33 x 17.5 x 27.5 cm;
A hard and partially disintegrated rubber corrugated hose has been left
wrapped around the inhaler where it had dried; Detained instructions for
operating, pacing and servicing the inhaler are printed inside the enameled
storage case (The case may be made of metal or fiberboard?]; Printed with
these instructions is the name of the device, “E.S.O. CHLOROFORM APPARATUS”;
The enameled case measures approximately 29.5 x 29 x 24 cm when the lid/door
sits in an unforced slightly open position; When the lid is held closed the
case measures approximately 29.5 x 29 x 17.5 cm; Marked on the inside of the
backpack straps is “M.E. Co 1944”; Held in the case with the inhaler is a
rubber and metal head harness for an oronasal facemask and a flathead
screwdriver.

Toward the end of 1941, Dr. Macintosh’s department was asked to develop a
light, sturdy and precisely accurate vaporizer for airborne forces. The
British Air Force did not want the flammable anesthetic ether among their
supplies. The rarely used liquid anesthetic chloroform was selected instead.
It was decided that chloroform’s advantages (chloroform is highly potent and
does not burn or explode) outweighed its disadvantages (potential for serious
side effects).

During WW II, Dr. Epstein and Mr. Suffolk worked on many military projects,
and the laboratory of the Anaesthetics Department was overloaded. When the
request for a chloroform vaporizer landed in their laps, Suffolk turned to
neighboring laboratories to assist with the production of a working model.
Colleagues of Suffolk, who worked in these laboratories, formed a company to
manufacture the device for the British Ministry of Supply, the Longworth
Scientific Instrument Company. Today the company’s name is Penlon Limited.
Several hundred E.S.O. Vaporizers were produced and used in the European
Theatre during WW II.