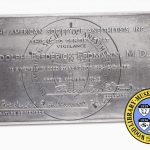 Dr. Adolph Frederick Erdmann (1867-1953) founded the Long Island Society of Anesthetists in 1905. The first meeting was attended by eight physicians. This was the first professional anesthesia society in the United States, and the second in the world. It steadily grew to become a statewide, and then a nationwide organization. In 1944, it was renamed The American Society of Anesthesiologists (ASA). Dr. Erdmann was made ASA's Member No. 1, and he was given this silver membership certificate in honor of the occasion. At that time, ASA had over 1,000 members. As of December, 2013 the ASA had over 52,000 members.

Note Type: With
Notes: The card, or certificate, is held in a brown leather, or leatherette, sleeve,
7 x 11 cm in size.

Note Type: Physical Description
Notes: A thin sterling-silver card, about the size of a business or wallet ID card;
Engraved background image of the American Society of Anesthesiologists’ seal;
Images and words in the seal, only partially distinguishable, include a pilot
wheel, shield, stars, clouds, moon, ship, sea, lighthouse, and “Vigilance”
and “American Society of Anesthetists”, all within a perfect circle; The card
is engraved with the following text: “The American Society of Anesthetists,
Inc. [new line] This is to certify that [new line] Adolph Frederick Erdmann,
M.D. [new line] is a member in good standing for the year [the words ‘the
year’ have a horizontal line drawn through them] life. [new line] Active
member no. 1 [new line] [signature of] Paul W. Wood, M.D. [new line]
Secretary [directly under Wood’s signature] [new line] [signature of] A.
Frederick Erdmann, M.D. F.A.S.A. [new line] Signature of member [directly
under Erdmann’s signature]”; Name of the Manufacturer is engraved in very
small lettering on back of card: “Dieges & Clust”.

Note Type: Historical
Notes: In 1937, the silver certificate was ordered by the ASA Executive Committee in
special recognition of Dr. Erdmann’s role in the profession and in forming
the ASA as an organization. Excerpts from the April 8th, 1937 meeting
follow; The resolution was introduced by Dr. Thomas D. Buchanan: “Resolved,
inasmuch as Adolph Frederick Erdmann, M.D., who issued the call for the first
meeting to organize professional anesthetists in the United Sates, is
retiring from active practice and as he has faithfully served the Society as
Secretary, treasurer, … and past president of this Society, that his annual
active membership dues be remitted from this date on. (The resolution was
adopted.) [new paragraph] … your Executive Committee had ordered a memento
of the occasion in the form of a silver membership certificate … . [new
paragraph] Certainly no one is entitled to this recognition more than Dr.
Erdmann because he formed the first anesthetic society in America, which is
the second oldest society in the world. And no one can mention the name of Dr
Erdmann without feeling that he is the father of organized anesthesia in the
United States … .” Dr. Erdmann is the only person to have been awarded a
silver membership certificate. To prevent confusion when reading the physical
description of the card, please note that the society changed its name from
“American Society of Anesthetists” to “American Society of Anesthesiologists”
in 1945.