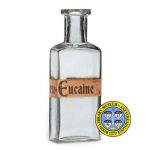 Eucaine is a local anesthetic. Local anesthetics are the medications used to numb small areas as well as large regions of the body. When injected into or near nerves, local anesthetics interrupt the transmission of pain signals to the brain. Eucaine was one of the first man-made substitutes for cocaine. It was synthesized around 1895 by the German chemist, Georg Merling (1856-1939.) Its value as a local anesthetic was described in 1896 by Dr. Gaetano Vinci, of Berlin. The following year, Dr. Vinci introduced a less irritating preparation called "Beta Eucaine", or Eucaine-B. For this reason the original formula became known as "Alpha Eucaine", or "Eucaine A". The original maker of both formulas was the German pharmaceutical company, Schering & Glatz. Eucaine was primarily used in eye, ear, nose and throat surgery, as well as in dentistry. Its use continued into the 1930s.

Note Type: Citation
Notes: Eucaine Hydrochlorate: A New Local Anaesthetic and a Substitute for Cocaine that is Free from its Disadvantages. New York: Schering & Glatz; 1897.

Note Type: Citation
Notes: Raviña E. The first synthetic drugs and the birth of chemotherapy. In: The Evolution of Drug Discovery: From Traditional Medicines to Modern Drugs. Weinheim: Wiley-VCH; 2011:29-31.

Note Type: Physical Description
Notes: One clear glass bottle with a thin brown paper label pasted around the center; The bottle is of the rectangular druggist type; Part of the label is torn, just at the beginning of the letter “B” in “Beta”. The full text on the label includes: Beta-Eucaine „Schering“.

Note Type: Historical
Notes: Cocaine was the first local anesthetic. Its use for local and regional anesthesia, to numb specific parts of the body and prevent the sensation of pain for dental and surgical procedures, began in 1884. By 1888 the significant adverse effects of cocaine began to concern the medical community and the use of regional anesthesia was looked upon with considerable skepticism. The search for better local anesthetics began in earnest. Physicians, chemists, and pharmacologists searched for other compounds that could numb tissue like cocaine but not cause euphoria, addiction or adverse side effects.

Beta-eucaine was one of a number of local anesthetics introduced during the 1890s. Its chemical predecessor, alpha-eucaine, was first synthesized by chemist George von Merling in 1884. Alpha-eucaine was far too irritating to tissues to see much use as a local anesthetic. Beta-eucaine was produced by George von Merling and Albrecht Schmidt in 1896. It was less irritating and could survive being sterilized by boiling, which cocaine could not. It was produced and sold by the pharmaceutical company Schering AG, and was often referred to simply as, “Eucaine.” As dentists and physicians became more familiar with local anesthetics discovered after beta-eucaine, especially after the introduction of procaine (Novocain) in 1905, its use dwindled.