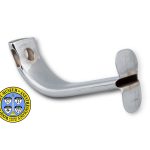 The human airway comprises everything by which we breathe: the nose, mouth, throat and lungs. Anesthetics can relax the muscles of the mouth and throat, obstructing normal breathing. To prevent this, anesthesiologists insert an artificial airway over the tongue to provide a clear passage for air. The American anesthesiologist, Dr. Paluel J. Flagg (1886-1970) dedicated himself to improving patient safety through better understanding and management of the human airway. He invented many kinds of anesthesia equipment, including an endotracheal tube, a color scale for determining blood oxygen, and the artificial airway shown here. The Flagg Airway is a modification of the Connell Airway. Dr. Flagg added another opening to Connell’s design, a round hole directly below that on the upper surface of airway. This further decreased the possibility of the airway becoming occluded. The Flagg Airway also has flanges on the proximal end, which help to keep it firmly in place. That feature was used again decades later in the Berman Airway. Dr. Flagg introduced his new airway in 1916, in the first edition of his popular textbook, The Art of Anesthesia. Nearly forty years later, he summarized a career spent in teaching doctors to prevent asphyxia in his book, The Art of Resuscitation.

Note Type: General
Notes: The title is based on the caption of an illustration of this airway in Dr.
Flagg’s 1916-1928 (first thru fourth editions) textbooks, The Art of
Anaesthesia.

Note Type: General
Notes: The early date in the date range for the possible year of manufacture is
based on illustrations from the third and fourth editions of Dr. Flagg’s
textbook, The Art of Anaesthesia. There is no flange in the first three
editions, while the illustration in the 1928 fourth edition has the type of
flange that the airway described here has. The end-date in the date range is
a rough estimate basted on the condition of the airway and the time when
plastic airways were largely replacing metal airways. The date range could
change if documentation that indicates the dates should be corrected.

Note Type: Citation
Notes: Coburn RC. The importance and prevention of respiratory restriction during
general anesthesia in the inhalation methods. Am J Surg. October,
1913;27(10):361-363. https://books.google.
com/books?id=pGg1AQAAMAAJ&printsec=frontcover#v=onepage&q&f=false. Accessed
February 4, 2015. [Includes an image of the Connell airway, for comparison
with Flagg’s modification.]

Note Type: Physical Description
Notes: 1 metal oropharyngeal airway; The flange extends approximately 2 cm upward
and downward from lumen opening; At approximately .7 cm in height and 2.5 in
width, the body of the airway is flat but curved to fit the shape of the
oropharyngeal space; Near the pharyngeal opening there are four holes in the
body of the airway: one on each side, one on the top, and one on the bottom;
A manufacturer’s mark is on the lumen, “V. MUELLER & CO.”

Note Type: Historical
Notes: In the first of seven editions of his classic textbook, The Art of Anesthesia
Dr. Paluel J. Flagg (1886-1970) refers to the “throat tube,” or oral airway,
as the “sine qu non” of the anesthesiologist. Also called oropharyngeal
airways, oral airways are tubes that are inserted into the mouth and upper
throat to prevent breathing from being obstructed while a patient is
unconscious.

Flagg’s “throat tube” was first mentioned and illustrated in 1916, in the
first edition of his text. He modeled it after an airway introduced in 1913
by fellow anesthesiologist Dr. Karl Connell (1878-1941). The original version
of Flagg’s airway did not have the prominent flange as the example described
here does. The first edition of Flagg’s textbook to picture the airway with a
flange was the fourth edition, published in 1928.

Dr. Paluel J. Flagg practiced anesthesia during a time when most physicians,
surgeons included, did not see a need or way to improve the administration of
anesthesia. Flagg was one of a small number of physicians who saw a need,
envisioned solutions, and forged a path for themselves and others. Some of
the other anesthesiologists in this cadre included Adolph Frederick Erdman
(1867-1953), James T. Gwathmey (1862-1944), Karl Connell (1878-1941), and
Ralph M. Waters (1883-1979).