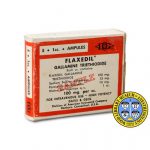 Anesthesiologists may administer muscle relaxants (neuromuscular blocking agents, or NMBAs) as part of general anesthesia.  NMBAs cause skeletal muscles to be unable to contract.   This muscle relaxation is an important part of some surgeries to improve the operating conditions for the surgeon.  Most of those in use today are non-depolarizing agents, which act by blocking the nerve to muscle signal transmission receptors which involves blocking the neuromuscular signal transmitter acetylcholine.   The first NMBA used for modern medicine, d-tubocurarine, was a non-depolarizing agent.  Introduced in 1942, it is the active principle of curare, which was extracted from certain plants native to South America. Pharmacologist Daniel Bovet, DSci, ForMenRS  (1907-1992) was born in Switzerland, and spent his career in France and Italy.  In 1946, he and his colleagues at the Pasteur Institute in Paris synthesized gallamine (Flaxedil), the first synthetic NMBA.  A non-depolarizing agent, it is only one fifth as potent as d-tubocurarine.  It has a side effect of increasing heart rate.  This package of Flaxedil was made by Davis & Geck in the early 1950s.  In 1957, Dr. Bovet won a Nobel Prize for his work on this and other drugs.  Newer agents have replaced gallamine as an adjunct to anesthesia.