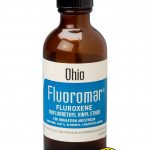 In 1813, Sir Humphry Davy (1778-1829) suggested that a theorized element be named fluorine (F on the periodic table.)  Fluorine was not isolated until 1886 by the French chemist Férdinand Fréderic Henri Moissan (1852-1907). Extensive military research and development during World War II led to the creation of new fluorinated anesthetics. The first of these was fluroxene, synthesized in 1951 by Julius G. Shukys, who worked for Airco, the parent company of Ohio Medical Products. The first volunteer to receive fluroxene as part of the clinical testing of the anesthetic was anesthesiologist Max S. Sadove, M.D. (1914-1997). Ohio Medical Products began marketing the drug under the brand name Fluoromar in 1960. The company's advertising accurately stated that fluroxene provided rapid induction and quick recovery, and that it could be used in any vaporizer. It was flammable only at higher concentrations, and could be used in combination with other anesthetics, as well as with epinephrine. This, together with its powerful analgesic effect, made it a useful choice for surgeries requiring only a light plane of anesthesia. But Ohio's claims that Fluoromar did not affect the heart, liver and kidneys were disproven by numerous studies. This belated recognition of its toxicity prompted changes in drug evaluation methods. Fluroxene was withdrawn from clinical use in 1974. By then it had already been far surpassed in popularity by halothane, the second fluorinated anesthetic, and the first of a new generation of anesthetics that were not flammable.