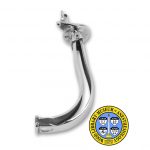 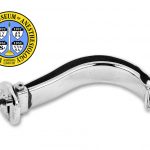 The Gwathmey Expanding Airway, patented in 1938, is an oropharyngeal (oral) airway. Oral airways are placed over the tongue to create an air passage from the mouth to the far back of the throat. Sometimes oral airways can be difficult to insert. Dr. James T. Gwathmey (1862-1944) offered a creative solution by designing this airway to expand after being inserted. Oral airways are just one device used by anesthesiologists to maintain an unobstructed passage through which patients breathe during surgery. Gwathmey modified and developed a number of devices, including the Gwathmey Folding Vapor Mask, and an anesthesia machine which inspired Boyle's apparatus. Gwathmey wrote the first comprehensive American textbook of anesthesiology, Anesthesia, published in 1914. He also significantly influenced the development of anesthesiology as a profession.

Note Type: General
Notes: Title based on the WLM name for the object.

Note Type: Physical Description
Notes: Oropharyngeal-airway made of chrome-plated metal; The airway is composed of
an upper and lower piece; Each piece includes a part of the flange, bite, and
plate that extends into the oropharynx; One piece forms the upper part of the
airway and the other piece forms the lower part; The two pieces are secured
to one another in two places: They are hinged together just behind the flange
and via an adjustable connection where an extension of the upper and lower
pieces of the flange meet; The adjustable connection is comprised of a
threaded screw that protruded from the flange-extension of the lower piece
and through a hole in the upper extension; A wing-nut is threaded onto the
screw over the upper extension; Turning the wing-nut to tighten the
connection causes the airway to expand, while turning the wing-not to loosen
the connection allows the expansion to collapse; The expansion is greatest
near the pharynx-end of the airway; With the exception of the extension, the
two pieces of the flange form an oval shape; Manufacturer’s markings on the
upper-flange include, “PATENTED”, and on the lower-flange, “PENN” underlined,
“U.S.A. CHROME”, and “116”; The other side of the upper- and lower-flange is
marked with the letter, “U”; The airway is shaped to reflect the curvature of
the oropharynx; Measured in straight lines from ‘top to bottom’, ‘side to
side’ and ‘end to end’, the size is approx. 7 x 4 x 11.5 cm.

Note Type: Historical
Notes: Dr. James T. Gwathmey modified and developed a number of anesthesia devices,
including an anesthesia machine that was the inspiration for Dr. H. Edmund G.
Boyle’s apparatus (Cope, 1993). Gwathmey applied his innovative talents to
research and the practice of anesthesia, exploring a variety of theories and
techniques. He was one of the first physicians to have a full-time private
anesthesia practice in the U.S. Gwathmey significantly influenced the
professional organization of anesthesiology, as well as the development of
anesthesiology as a separate medical specialty. He was an original member of
the Long Island Society of Anesthetists, which became the New York Society of
Anesthetists in 1911, and then the American Society of Anesthetists in 1935.
Working within the American Medical Association to establish anesthesia as a
recognized medical specialty, he helped to found the American Association of
Anesthetists, and became the organization’s first president. He also wrote
the first comprehensive American textbook of anesthesiology, “Anesthesia,”
which was published in 1914. The patent for his expanding airway was issued
in 1938.