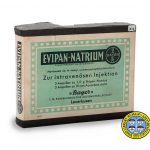 The hypnotic agent hexobarbital was one of the first barbiturate drugs.   It was prepared by the German pharmacologists Weese and Scharpf in 1932, and used by anesthesiologists for induction (the first phase of general anesthesia).  The drug was sold by the German pharmaceutical giant, Bayer, under the name “Evipan”.  In the United States, it was marketed under the name “Evipal” by Winthrop Chemical Company, a Bayer affiliate.  This box was captured at the fall of Cherbourg, July, 1944, and later donated to the WLM by Captain Harry Meyer, M.D.

Publisher: Leverkusen : Bayer, I. G. Farbenindustrie Aktiengesellschaft, [between 1940 and 1944].

Note Type: General
Notes: The date range for the possible year of manufacture of this package of
Evipan-Natrium is based on the recorded provenance – abandoned by retreating
German soldiers and collected by Captain Marry Meyer in July of 1944. The
date range could change if documentation indicates that it should be
corrected.

Note Type: Historical
Notes: Evipan was a brand name for the barbiturate hexobarbital. Barbiturates are a
group of drugs that slow down, or depress, the activity of the nervous system
including the brain.

Barbituric acid, the compound from which barbiturates are derived, was first
synthesized by the German chemist Adolf von Baeyer in 1864. The first
derivative of barbituric acid used to produce sedation was described in 1903.
Barbiturates that could be administered intravenously were introduced in the
1920s. These had exceedingly long lasting effects. In 1932, when the
shorter-acting hexobarbital was introduced in Germany it quickly became a
popular drug for inducing anesthesia. Its use spread worldwide. A few years
later, after the introduction of thiopental, the use of hexobarbital began to
wane. (See catalog records aiwh, aiwg, aivy, and the WLM webpage for
hexobarbital at https://www.woodlibrarymuseum.org/museum/item/70/thiopental.)

This German-manufactured package of Evipan was captured during World War II
at the fall of Cherbourg, France in July, 1944. It was donated to the WLM by
anesthesiologist Captain Harry Meyer, MD, (1919-1977). In the U.S., the brand
name for hexobarbital was Evipal.