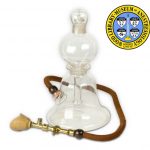 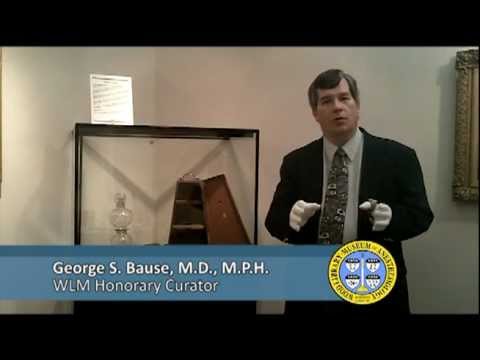 William Hooper (1818-1878), a chemist, innovator and entrepreneur, was an active participant in the early fervor to develop effective ether inhalers. He is even reported to have successfully administered ether for an eye surgery. Hooper based this inhaler on one designed by Dr. James Robinson (1813-1862). Robinson was a prominent London dentist who was the first to successfully administer an ether anesthetic in England, on December 19, 1846 (63 days after William Morton’s demonstration in Boston). The exact nature of any contact between William Hooper and James Robinson is poorly documented, but second-hand accounts suggest that Hooper had Robison’s encouragement to modify and improve the inhaler.

Note Type: General
Notes: Title from the WLM name for the object; Alternate titles based on articles or
letters to the editor referencing the inhaler (Morris, 1847 ; Wells, 1847 ;
Mr. Hooper’s ether inhaler …, 1847).

Note Type: With
Notes: With a wooden carrying case, the shape of a truncated-pyramid, approx. 45 x
25.5 x 28 cm, divided into three storage spaces by 2 shelves; The shelves
have a groove cut-into them for holding the tubular, brass works. The case
was originally made to hold a Nooth carbonating apparatus.

Note Type: Physical Description
Notes: The inhaler consists of a multipart glass body, wood connectors, flexible
tubing, tubular brass works (breathing tube with valves), and mouth-pieces;
The larger, lower-portion of the glass body is bell-shaped with an opening at
the top and one lower on its side; The upper-portion of the glass body is
spherical with a long glass-tube extending from the bottom; The upper-portion
sits on top of the lower bell-shaped-portion with the tube extending
approximately half-way into the lower portion’s interior; Into the opening of
the spherical upper-piece is an adjustable double-stopper; A glass cap fits
over the stopper for when the inhaler is not in use; A flexible, woven-cloth
covered tube connects to the lower side of the bell-shaped-portion of the
body via a wooden connector; The proximal end of the flexible tubing is
connected to a brass tube with a stop-cock, and expiratory and inspiratory
valves; A wooden-mouthpiece, shaped to cover the mouth, is attached to the
proximal end of the brass tube; The mouthpiece has thin leather edging;
Alternately, a small ivory mouthpiece connected to the end of metal tubing,
can be screwed into the opening of the brass tube in the center of the larger
mouth-piece; The ivory mouthpiece is meant to be held in the patient’s mouth.

Note Type: Historical
Notes: William Hooper, a chemist, innovator, and savvy entrepreneur, was an active
participant in the early fervor to develop effective ether inhalers. He is
even reported to have successfully administered ether for an eye surgery
(Untitled report. Med Times,1847). An unauthored description of the inhaler,
with an illustration, can be found in the January 16, 1847, Lancet (see
citations above). Hooper based the design of this inhaler on one designed by
Dr. James Robinson (1813-1862). The exact nature of any contact between
William Hooper and dentist James Robinson is poorly-documented (Zuck, 2004 ;
Macdonald & Zuck, 2006). Summaries of the January 13th, 1847 meeting of the
Pharmaceutical Society, where a number of recently developed ether-delivery
apparatuses were presented, reported that Hooper made the apparatus as
suggested to him by Dr. Boot and Robinson (Pharmaceutical Society, 1847 ;
Transactions of the Pharmaceutical Society, 1847). The summary of the
proceedings in the Pharmaceutical Journal also reported that Hooper had the
permission of Boot and Robinson to develop the apparatus, and that Hooper
added his own improvements (1847). James Robinson, a prominent London dentist
was the first to successfully administer an anesthetic in England: He did
this on December 19th, 1846 when he administered ether and painlessly removed
the molar from a patient, 63 days after William Morton’s first successful
demonstration in Boston, Massachusetts on October 16, 1946.

Note Type: Publication
Notes: Robinson J. A treatise on the inhalation of the vapour of ether, for the
prevention of pain in surgical operations, containing a numerous collection
of cases in which it has been applied, with the names of the operators :
history of the discovery–description of the apparatus–method of preparing
the ether–remarks as to the time when the operation should commence, etc.
London: Webster, 1847.